The Journey of the Magi

If, while on your journey, you came to a spot like this, it could feel like home.
But journey on.

I love this poem by T.S. Elliot, and so I quote it in its entirety, even though it is a bit lengthy. This is the last of the poems from the Education of Justice website. I do hope you have enjoyed them!

The Journey of the Magi
by T.S. Elliot
A cold coming we had of it,
Just the worst time of the year
For the journey, and such a long journey:
The ways deep and the weather sharp,
The very dead of winter.’
And the camels galled, sore-footed, refractory,
Lying down in the melting snow.
There were times we regretted
The summer palaces on slopes, the terraces,
And the silken girls bringing sherbet.
Then the camel men cursing and grumbling
And running away, and wanting their liquor and women,
And the night-fires going out, and the lack of shelters,
And the cities hostile and the towns unfriendly
And the villages dirty and charging high prices:
A hard time we had of it.
At the end we preferred to travel all night,
Sleeping in snatches,
With the voices singing in our ears, saying
That this was all folly.
Then at dawn we came down to a temperate valley,
Wet, below the snow line, smelling of vegetation;
With a running stream and a water-mill beating the darkness,
And three trees on the low sky,
And an old white horse galloped away in the meadow.
Then we came to a tavern with vine-leaves over the lintel,
Six hands at an open door dicing for pieces of silver,
And feet kicking the empty wine-skins,
But there was no information, and so we continued
And arrived at evening, not a moment too soon
Finding the place; it was (you may say) satisfactory.
All this was a long time ago, I remember,
And I would do it again, but set down
This set down
This: were we led all that way for
Birth or Death? There was a Birth, certainly,
We had evidence and no doubt. I had seen birth and death,
But had thought they were different; this Birth was
Hard and bitter agony for us, like Death, our death.
We returned to our places, these Kingdoms,
But no longer at ease here, in the old dispensation,
With an alien people clutching their gods.
I should be glad of another death.
Source:Collected Poems 1909-1962, T.S. Elliot. London: Faber & Faber Ltd., 1974

We know them as Three Wise Men, and one thing brought them together over the miles of rough terrain. May our hearts also be One. This is the only way we will find peace. 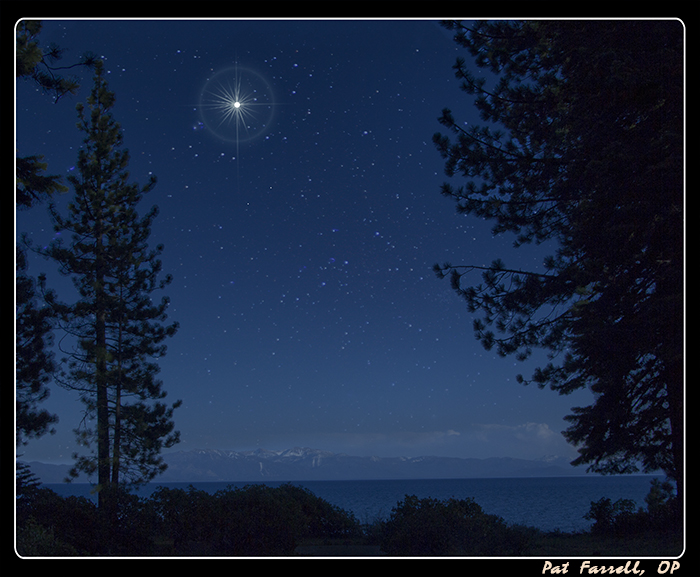 A Story of Some Truly Wise Men
By Christine Rodgers
These three
rulers
restless
in their own hearts
pacing
within
the narrow
parameters
of their kingdoms,
saw
simultaneously
the mighty
unblinking
star
that would
lead them
all
to their greatest challenge.
They hurried
then —
from each
of their sovereign corners,
and found themselves
together
in the doorway
of a stable

gazing upon
an infant
only a few days old
as they bent
in adoration
with those already gathered.
There was no other choice –
the majesty
of the world
was before them.
Source: http://www.greatgreenheart.com/ – found on the Education for Justice website.

Are We Ready? It’s Almost Here!

Experience Christmas Joy with the spirit of a child

Birthing
By Mark Unbehagen
How does one birth peace. . .
in a world that seems to prefer the profits of war?
How can one birth hope. . .
in a time when devastation is born of poverty and pandemic?
How does one birth love. . .
in a world whose heart is captive to fear?
How can one birth joy. . .
How can one birth joy?
The plastic manger scene on the front lawn
just doesn’t do it!
Birthing is so much more!
It is, and requires. . .
radical intimacy,
prolonged patience,
the coming together of pain and ecstasy,
the joining of our deepest hopes and fears.
Face it,
birthing is a messy business.
And yet this process occurs every moment of our lives:
as our bodies birth cell upon cell,
as our minds birth ideas and dreams into the world,
as our spirits birth. . .
in the midst of labor and pain. . .

as our spirits birth.. JOY

The Ledge of Light

God is a thousand acres to me now

The Ledge of Light
by Jessica Powers
I have climbed up out of a narrow darkness
on to a ledge of light.
I am of God; I was not made for night.
Here there is room to lift my arms and sing.
Oh, God is vast! With Him all space can come
to hole or corner or cubiculum.
Though once I prayed, “O closed Hand holding me…”
I know Love, not a vise. I see aright,
set free in morning on this ledge of light.
Yet not all truth I see. Since I am not
yet one of God’s partakers,
I visualize Him now: a thousand acres.
God is a thousand acres to me now
of high sweet-smelling April and the flow
of windy light across a wide plateau.
Ah, but when love grows unitive I know
joy will upsoar, my heart sing, far more free,
having come home to God’s infinity.

Source: “The Ledge of Light” from The Selected Poetry of Jessica Powers, edited by Regina Siegfried and Robert F. Morneau. Kansas City, MO: Sheed & Ward, 1989. Found on the Education for Justice website.

Presence
by Stephen Leake
Across the dark, a robin learns the Winter.
A candle dissolves; frank and sensuous
Against the extending light.
The streets remain illegible with snow.
I travel through you; uncurling
Where weather decorates the night
And naves of Christmas pines
Grasp human shadows.
Alone I go, echoing carols
In powdered places. Echoes that are glorified.
Prolonged.
Until I find you on the bench
Pressed with our pasts.
A child again. Tricked and traced by
Memory’s gift. Lasting. Imprinted.
A proof of the year’s new world.
Source: http://www.christmas-time.com/presence.htm – found on the Education for Justice website. 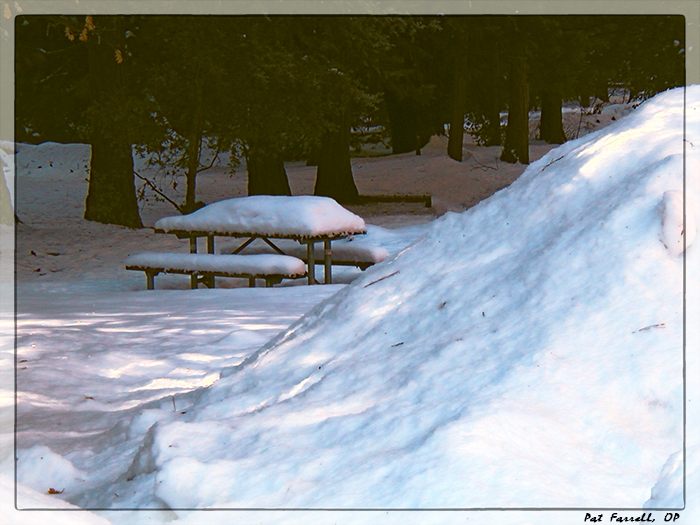 I think I’ll have to wait a while for the snow to clear from this bench.

Can I see Mary and her child in the Salvadoran mother and daughter?
Can I if she moved to this side of the border . . . without documentation?
Even though the wages she gets for picking coffee for us to drink is not enough to feed her family?

May Christmas Come
by Alan Jones
The rough beast slouching
toward Bethlehem,
still waits to come to term.
Christmas comes and goes
as we expect.
Nothing changes.
This year in New York, Jerusalem
and Kabul,
the Innocents are slaughtered
according to Herod’s schedule.
His rage, unchecked,
still does its work.
Yet this year
things could be different.
September 11th adds urgency
to the
birth,
making this the time of choosing.
The choice is ours
to miss the point or
see Mary and her child
in every mother and her baby,
and adore, absorbing
the rage and terror
and with a loving heart
rebuild the world,
making peace our gift.
May Christmas come.
Source: http://www.thewitness.org/agw/jones.121901.html (11/5/07) – found on The Education for Justice website. 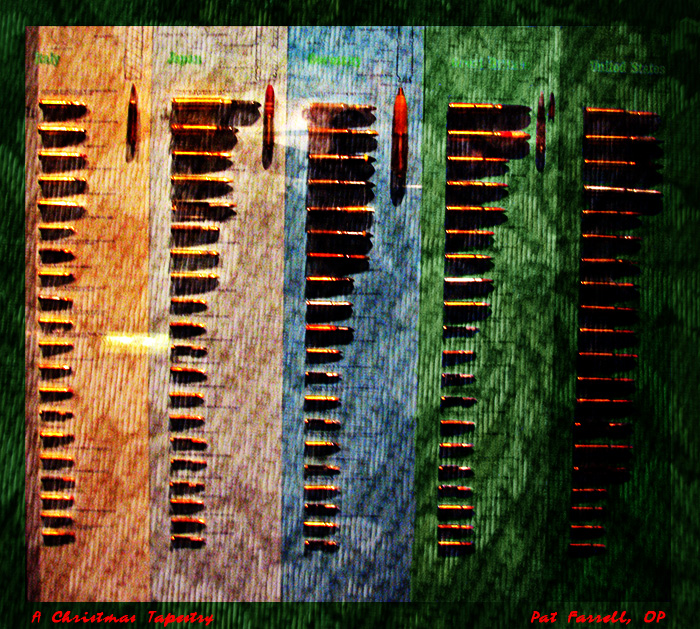 This is ammunition from World War II. The countries listed are Italy, Japan, Germany, Great Britain, and the United States.
Do you remember the song “Silent Night – 7 O’clock News” by Simon and Garfunkel?

The Christmas Tapestry
By Michael Hare Duke
The humdrum duties of the land,
feeding the beasts, mucking out the straw
provide the dull hessian background
of the Christmas scene.
Suddenly the tapestry is lit
by glory’s gold
and smirched by red threads of violence.
First the angel song
caroling the Word made flesh,
then the murderous fire of Herod’s fear
slaying the Innocents
Is conflict part of the perennial pattern
of our response to Love’s story?
Colonial might, conversion
proceeding from the barrel of a gun
betray the gracious Christ;
the fear of might and money
breed Terror.
Innocents of Palestine,
Arab and Jew
bleed from the bombs and guns
that violence deploys;
the flash of gunfire
rapes the night’s tranquility over Baghdad;
the mothers of Breslan weep for their children
and will not be comforted.
Meanwhile there’s far within;
as each of us grows old
black crows of death and disease
darken our days.
Come Love anew
let the angels’ song
counterpoint our tears
and lace the clouds with glory.
Give us an unambiguous blessing
by the Birth
to paint a rainbow
above our hearts’ distress.
With love and prayers for Light to overcome
the current darkness, political, ecclesiastical and personal.
Source: http://thewitness.org/agw/hareduke010305.html (11/5/07) – Found on the Education for Justice website.